You are here: MORR ENG > Events > The foreign trade in Poland and the Małopolska Region 2019

The foreign trade in Poland and the Małopolska Region 2019

Export and import in Poland

Total export and import for the country

The share of Małopolska Region in generating total export and import for the country (the value of the contribution index) has been falling for the third year in a row. Both in the case of shipped and imported goods, the decrease was relatively insignificant – with exports from 4.6% to 4.4%, and with import from 4.9% to 4.6%. Nevertheless, these values ​​are the lowest in years. However, attention should be paid to the constant increase in the value of goods and services classified as “Unclassified”, both in export and import, which has been progressing for years. This results in a decrease in the share of the value of the contribution rate for individual regions, and at the same time does not have to mean a decrease in their role. 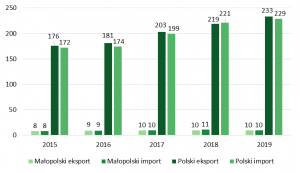 Export and import in other regions

The regions with the highest value of export (each over 27 billion EUR) are Mazowieckie and Śląskie. They generate nearly a quarter of domestic export. Wielkopolska and Dolnośląskie are the regions, where export exceeds 20 billion EUR in value. The next region in the ranking – Dolnośląskie, however, had the highest increase in euro compared to 2018 – the value of exported goods increased by 2.3 billion EUR. Apart from the above-mentioned regions, only the Pomorskie sends goods of greater value (11.85 billion EUR).When it comes to generating domestic export, the Mazowieckie and Śląskie dominate. They generate respectively 12.3% (Mazowieckie) and 12% (Śląskie) of the value of domestic export.

The Małopolska Region produces 4.4% of national export, which places the region invariably on the 6th position.The value of import in the Mazowieckie, the best in the country, at the level of 61.52 billion EUR, is almost equal to the total of three subsequent regions in the list – Wielkopolskie (23.07 billion EUR), Śląskie (21.34 billion EUR) and Dolnośląskie (18.26 billion EUR). In 2019, six regions recorded an increase in the value of import, nine a decrease (including Małopolska), and only the Lubelskie did not record any changes. 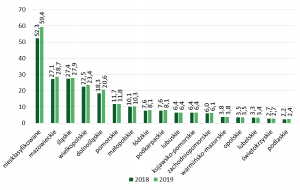 The value of export and import per capita

The regions of the western part of Poland are dominators in case of export value per capita. The highest level was achieved by Dolnośląskie (7.1 thousand EUR per capita), followed by Wielkopolskie and Lubuskie. Above the average for Poland, the value of export per capita is also recorded in Mazowieckie and Pomorskie. The Małopolska Region reached the value of the indicator at the level of 3 thousand EUR per person.The value of imports per population in Polish regions increased to 6,000 EUR per person. 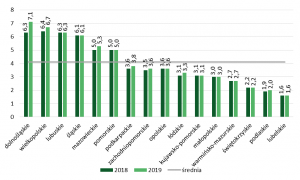 We invite you to read the report Foreign trade in Poland and Małopolska 2019. Basic data (Polish language version).