You are here: MORR ENG > Researches > Economy > An air pollution influence’s on an economic activity in Małopolska Region

The report answers the question how much most of the air pollution generated by humans, including heavy industry, low emissions, automotive, affect business operations? 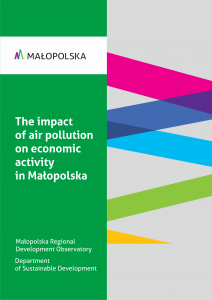 The feedback is taken from representatives of the travel, outsourcing and industrial companies and the main acpect concerns the phenomenon of sick absence related to exposure to polluted air in the Małopolska Region. The study was conducted in three groups of entities in which the level of air pollution plays different but important role. For the tourist industry, the occurrence of natural values and the condition of the natural environment is crucial. Air pollution in naturally attractive areas can, for example, discourage tourists from visiting such places, which of course will lead directly to the outflow of capital from the tourism business. In the business services industry (outsourcing), air pollution is treated as an indicator of the quality of life and attractiveness of a place from the point of view of locating investments in the area of services and advanced technologies. On the other hand, in the industrial sector, economic activity is associated with the generation of pollution and incurring the costs of their emission and reduction.

Although we are increasingly aware of the importance of ecological behavior in our everyday lives, there aren’t still enough resolute, systemic and common solutions that would eliminate the problem of polluted air. We are already used to living in a contaminated and depleted environment, but it is not a natural state in which man and nature can exist. As long as its resources and balance are not disturbed, nature is able to absorb pollution to some extent and regenerate itself. But humanity is on the border of this balance, and its exceeding may eventually prove irreversible.

According to the definition, the cause of air pollution, in addition to natural factors, such as volcanic eruptions or forest fires, is the introduction of solid, liquid or gaseous substances into the air in such quantities that may threaten human health, negatively affect climate, living nature, soil or water, and cause other damage to the environment. This has been happening since the outbreak of the industrial revolution and the emission of pollutants is increasing every year, although in recent years its decline has been noticeable, especially SO2 (by 59%). Despite this, a huge amount of carbon dioxide (CO2) [336 557] is still released into the atmosphere – in this case even an increase of 6% was recorded, carbon monoxide (CO) [2,534], non-methane volatile organic compounds (NMVOCs) [948], oxides nitrogen (NOX) [804] and ammonia (NH3) [308] [in thousand tonnes data for 2017]. In turn, dust emission of 341 thous. tone.

Małopolska Region inhabitants’ lose from 2.05 million to 2.23 million working days a year due to air pollution. In terms of the number of days of sick leave due to poor air quality, the highest number for the analyzed years was obtained by Kraków. This is not only due to the state of the environment, but mainly due to the largest population of the city in the province. Krakow has the largest number of lost work days: in the after-heating season of 150,000 and 430 thousand during the heating season. The threefold difference between the seasons is mainly due to the significant difference in air quality between these periods. The worst month in years 2015–2018 was January, which means that, on average, this is the worst period in terms of smog and it has the most lost work days attributable to air pollution.

The average annual number of sick days absence for Małopolska is 2.12 million. The average annual cost of lost working days associated with the gross salary is 400 million PLN. Among diseases related to air pollution in Małopolska, the most represented groups of diseases (% of absenteeism days per group of diseases) are respiratory diseases (14%), nervous system diseases (6.6%), mental disorders and behavioral disorders (6, 2%), cardiovascular disease (4.6%), cancer (3.4%).

Małopolska’s investment attractiveness and the environment

Małopolska is the region where environmental pollution and its protection have a dual impact on economic development. On the one hand, there are areas with a very high investment attractiveness for industry (Kraków and Oświęcim subregions), and on the other, attractive areas for economic activity based on environmental and natural values (recreational tourism, spa tourism, health care, services establishing the work of specialists for whom good life conditions are crucial for employment’s decision).