The labour market is a complex machinery in which one of the most important positions is occupied by people – their competences, skills, and abilities. 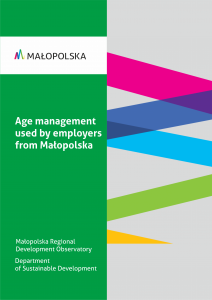 For several years, with the increased demand for labour and a simultaneous decline in unemployment, Małopolska has been facing the employment gap. The economic situation is influenced by the low level of economic activity of the region’s inhabitants, as well as the problem of an aging society.
In this situation, it is necessary for specialists in the labour market to propose and entrepreneurs to undertake such remedial actions that, at least in part, will be able to eliminate the problem of the lack of employees.

One of them may be the activation of people who have been professionally inactive so far, another – introduction of new management solutions that will actually improve the situation of individual employees, and ultimately contribute to their longer stay in the labour market.